Obituary for Edward A. Cooley 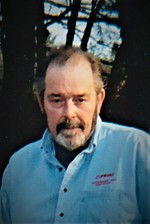 Edward A. Cooley
1944-2019
Edward A. Cooley, 74, of Northborough passed away peacefully at home with family by his side, on January 12th 2019, after a period of declining health. Edward, a son of the late Edward A. and Mildred H. (Drew) Cooley, was a lifelong resident of Northborough with deep family and town ties. He was predeceased by his wife of 45 years Jean H. (Lindquist) Cooley in 2009 and a brother Ronald L. Cooley in 1968.
In his younger years Edward was an avid outdoorsman who loved hunting and fishing. He was a meat cutter for over 34 years and a proud member of the Teamsters Local 170. Edward played in a men’s softball league in town for many years and was a diehard Bruins and Patriots fan. He was a lifelong pet lover which included various dogs, cats, birds, and fish. His many interests included trucks, cars, tinkering in his workshop and all things related to WWII. But most of all, Edward was a quiet and gentle family man who’s grandchildren were the light of his life.
Among Edward’s survivors are his daughter Lisa and her husband John McGuinness [with whom he lived since 2009], and son Edward R. Cooley all of Northborough. His grandchildren John McGuinness and wife Kathleen, Michael McGuinness, Edward Cooley and Jason Cooley, as well as great-grandchild John [Jack] McGuinness (“the little guy”). His brothers Robert Cooley and wife Mary, James Cooley and Darlene Hart, along with numerous nieces, nephews and cousins.
According to his wishes, Edward will be laid to rest at Howard Street Cemetery, Northborough, with a private graveside ceremony.
Edwards family wishes to send a special thanks to the staff of Home Care Solutions, Inc. and VNA Hospice & Palliative Care, for their skilled care, support and compassion.
In lieu of Flowers, please consider a memorial donation to Home Care Solutions, Inc. , VNA Hospice & Palliative Care, VNACare or the MSPCA.