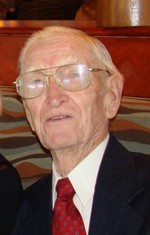 Ernest H. Youngdahl, Jr., 96, passed away on February 3, 2019, at the UMass Medical Center-University Campus, after a short period of declining health. He is survived by his devoted wife of 76 years, Helen L. (McNeil) Youngdahl; a son, Christopher Youngdahl of Hadashville, Manitoba, Canada; a daughter, Gretchen A. Youngdahl of Birmingham, AL and two grandchildren, Shea and Kaylee Youngdahl.

Ernie was born at Ft. Bragg, NC, the son to the late Ernest and Vivian (Passmore) Youngdahl. In June of 1942 Ernie and Helen married. Shortly thereafter he enlisted in the U.S. Army, he was part of the initial wave on D-day landing on Omaha Beach and later fought in the Battle of the Bulge. After his honorable discharge Ernie and Helen moved to Leominster where he served as a volunteer fireman. He began his career as a computer field engineer with Unisys Corp where he worked for 41 years.

In 1959 he moved his wife and two children to Northborough. He was at one time water & sewer commissioner. He enjoyed coaching little league and Babe Ruth teams over the years, bowling, and was proud of his two “hole-in-one” games at Juniper Golf Course. He still enjoyed playing cribbage. He was a member of the Senior Harmonica Group and a longtime parishioner at St. Rose of Lima Parish where he served as Sr. Usher. He was a man of integrity and faith, and his love for Helen and his family was evident.

A time of visitation will be held on Saturday, February 9th, from 9-9:30am, at Hays Funeral Home, 56 Main Street, Northborough. A funeral Mass will immediately follow at 10am at St. Rose of Lima Parish, 244 W. Main Street, Northborough. Ernie will be laid to rest, with military honors, in Howard Street Cemetery. Ernie’s family respectfully asks that all flowers and donations be omitted. For online condolences please visit www.HaysFuneralHome.com.